The Pub...
In the same way that shopping malls such as Bluewater, position their anchor stores at each corner, so the Triangle has a pub at each of its 3 points. Like guy ropes tethering the Triangle to the top of the hill, they are pillars of our community, even if some are more upstanding than others. I thought I'd feature the White Hart first, as it's the pub I have frequented the most over the 6 years I have lived locally, even though it doesn't  adhere to the guiding principle of this blog to feature only independent businesses. But, hey, rules are there to be broken, and besides, on that basis I wouldn't be able to include any of the pubs, as few these days can still be called a "Free House". 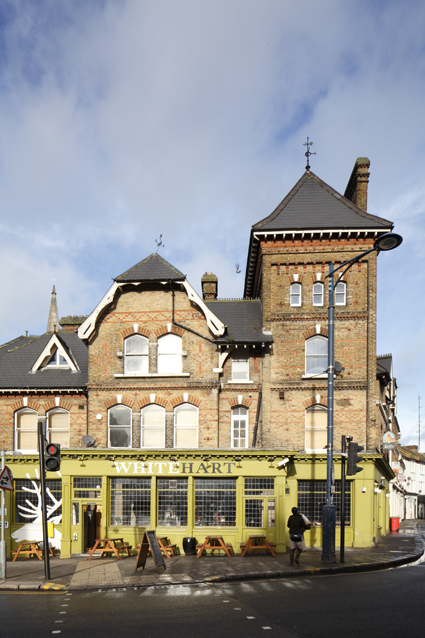 Although part of the Mitchells & Butlers portfolio, The White Hart is by no means a 'chain' pub, and maintains a little independence in both the way it looks, and the way it is run. How many pubs do you know that have a vintage clothing boutique tucked in one corner for a start? From  the huge antlers painted across the exterior, it's clear that this place has some individuality, although it has to be said that some of the quirkier elements inside have been swept aside in a recent refurbishment. An 'upgrade' that was presumably deemed a necessary response to the burgeoning local competition. Despite this, I would still agree with the boast on its website, that it's 'A staggeringly good Crystal Palace pub.' 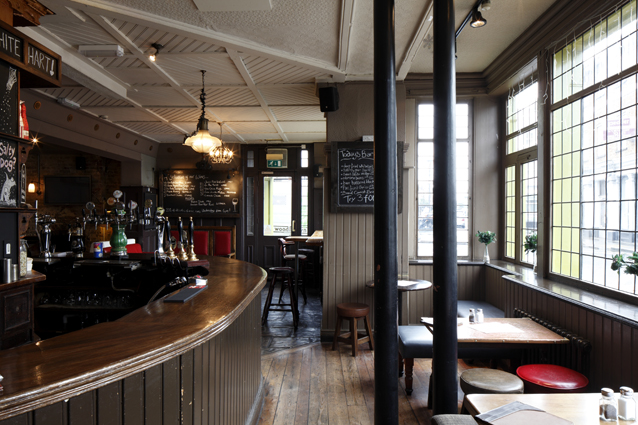 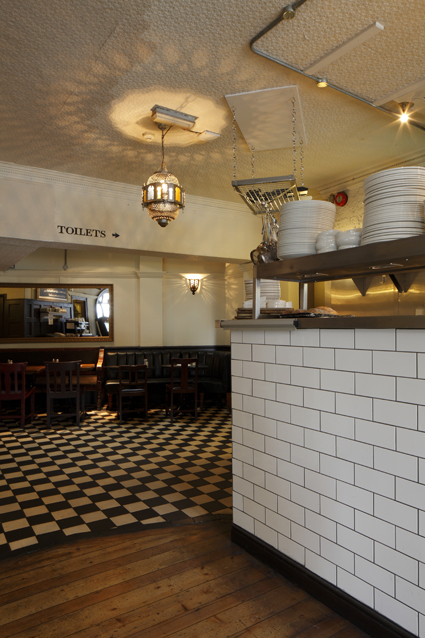 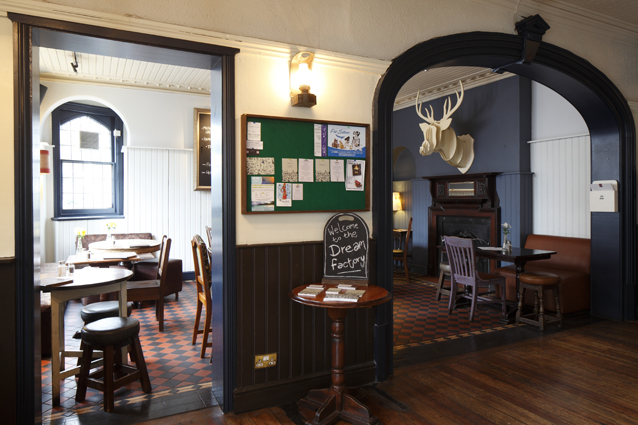 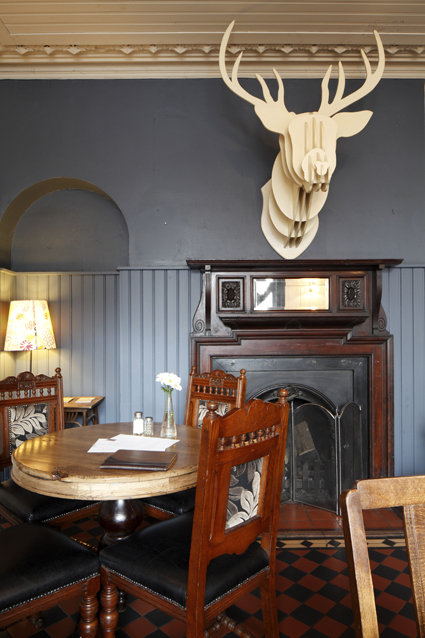 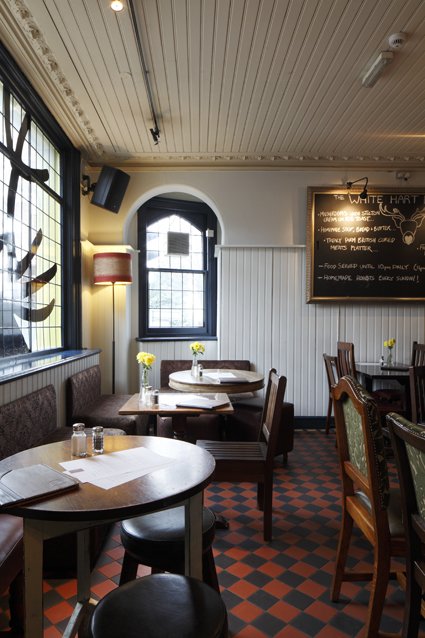 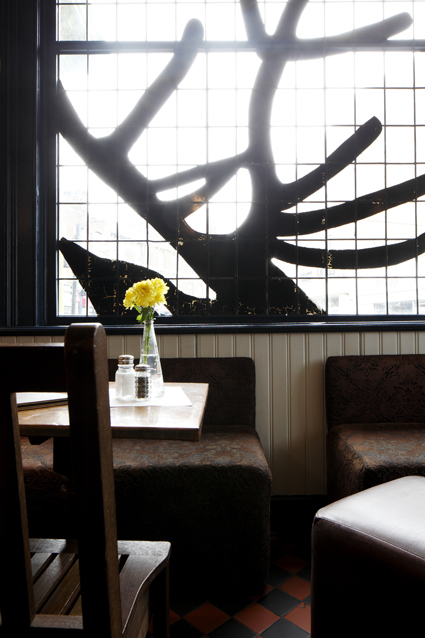 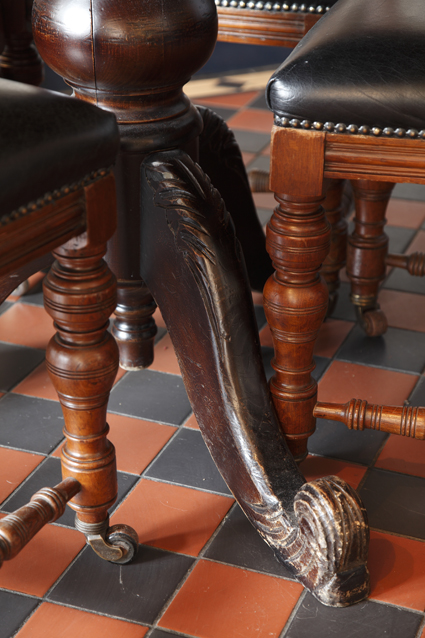 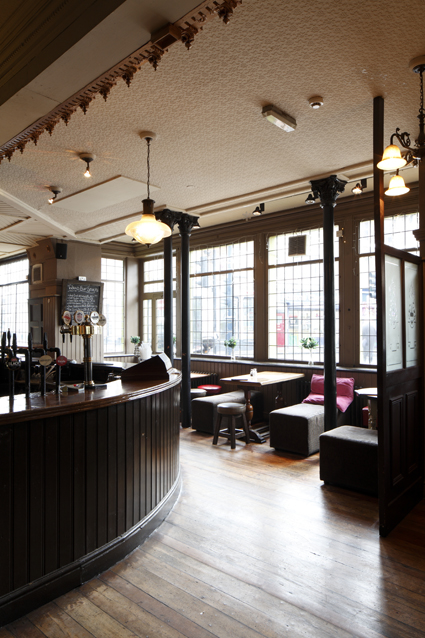 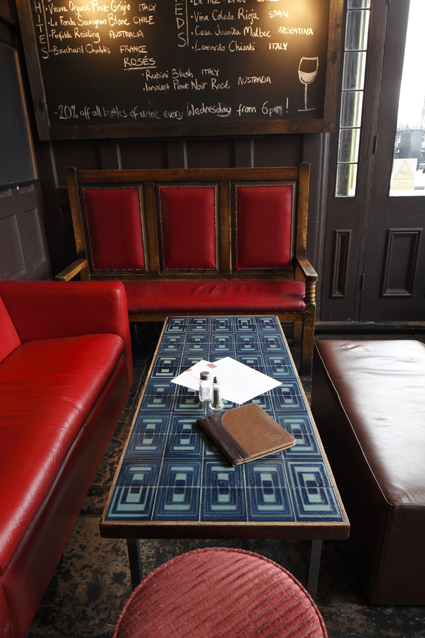 One of the problems with corporately owned pubs, particularly in towns and cities, is the high turnover of managers and staff, and the corresponding disconnectedness between bar staff and punters; the feeling of anonymity, of being in any old pub, in any old town. Fortunately The White Hart is in the capable hands of manager, Jake Attridge, who along with a committed core of staff, strives to make the regulars feel that this is their pub. Jake also has an additional attribute, which to my mind makes him ideally qualified to run a pub, namely a degree in philosophy. Although, as an employee of M&B, he has moved from city to city, and with previous stints working in Greece & America, Crystal Palace is beginning to feel to Jake, like somewhere he and his girlfriend might like to settle down. In fact, they knew as much, when, before moving to the area, and having to make a choice between 3 pubs in 3 different areas, one visit to the Triangle was all it took. 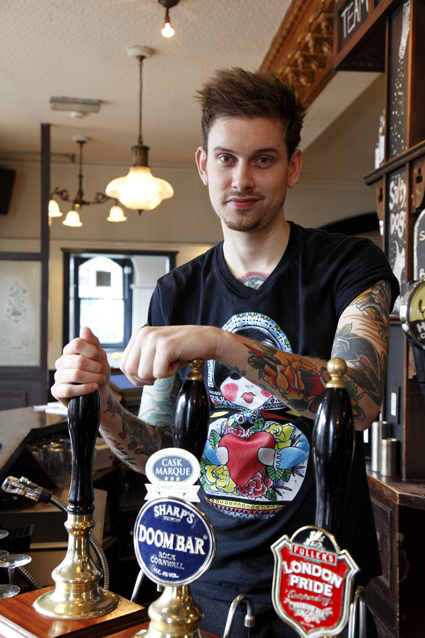 There are lots of reasons to visit The White Hart, whether for the pub quiz (mondays), knitting (tuesdays), live music (sundays), philosophy (see the manager), or just for the atmosphere of a good local. For me though, it's always been for a leisurely read of the papers (sundays), my favourite German Weissbier, (the one that tastes like bananas) and some of the finest fish and chips anywhere (other dishes are available)! 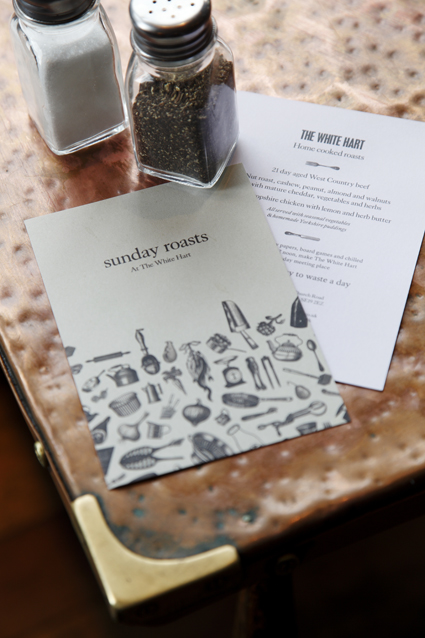 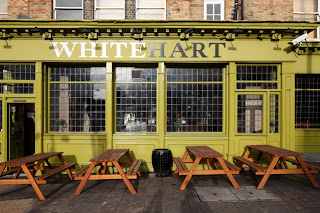 ... and the Shop
It's one of those little oddities that make living in Crystal Palace such a pleasure, like the anatomically incorrect dinosaurs in the park, or the long abandoned Italianate subway under the Parade, or that shop that used to sell tractors. A vintage clothing shop in a pub might seem an unlikely proposition, but Annette Prosser & Dawn Wilson immediately saw the potential. 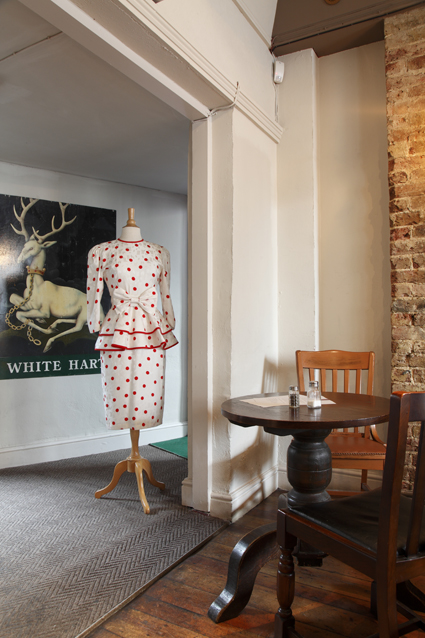 This tiny triangle of retail space within the Triangle, had, during the pub's previous incarnation as an O'Neills, served as one of those Irish bric-a-brac themed windows. In fact the shop is little more than the window. The temptation might have been to cram the space with merchandise, but Annette & Dawn felt strongly that they didn't want to go down the market stall route. Instead, an elegant image is created by the window displays and inside doesn't feel overly crowded. 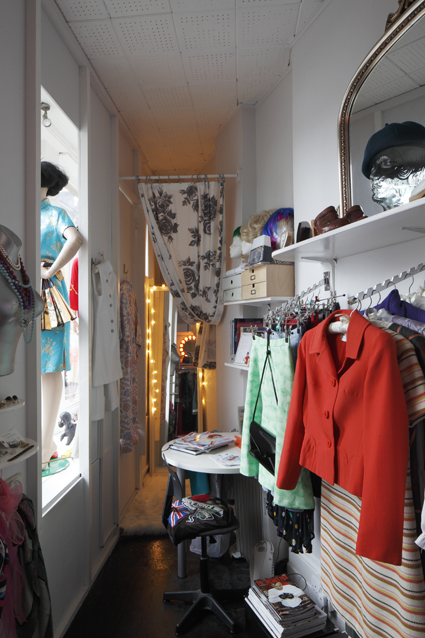 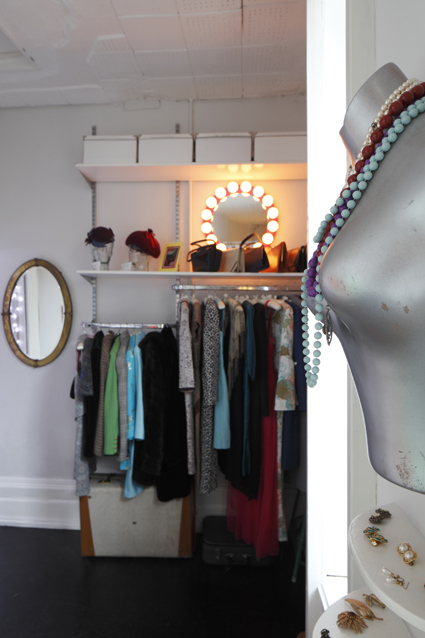 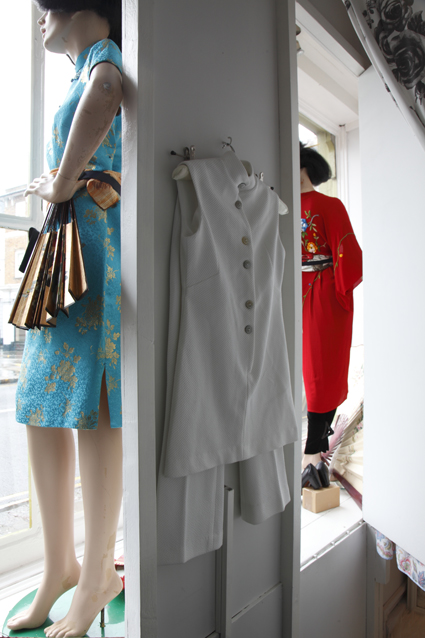 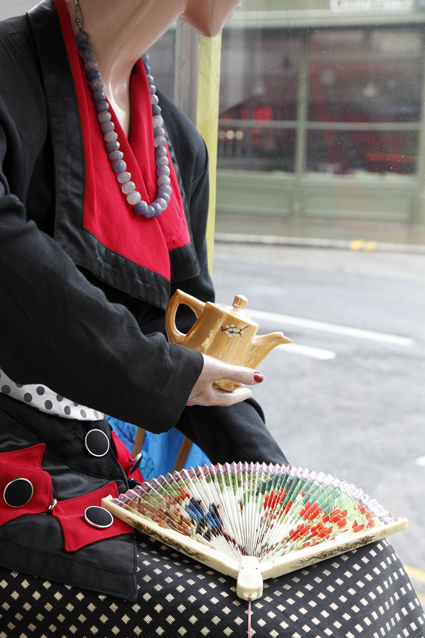 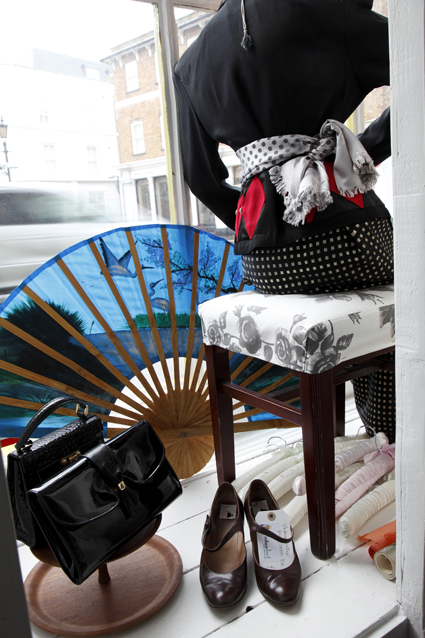 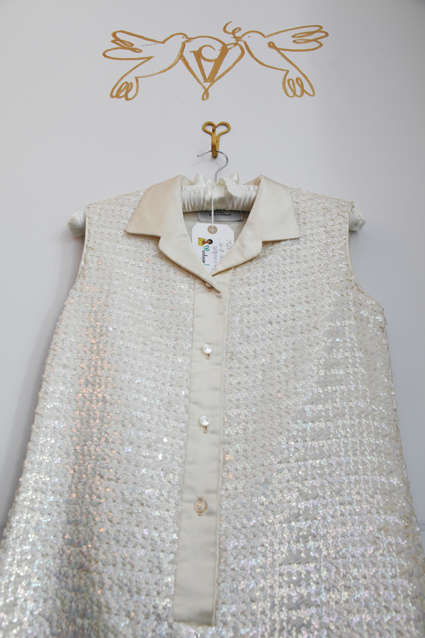 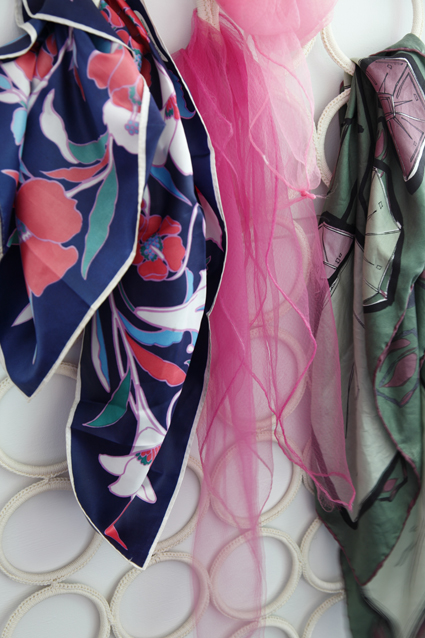 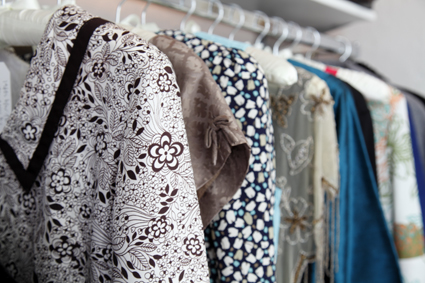 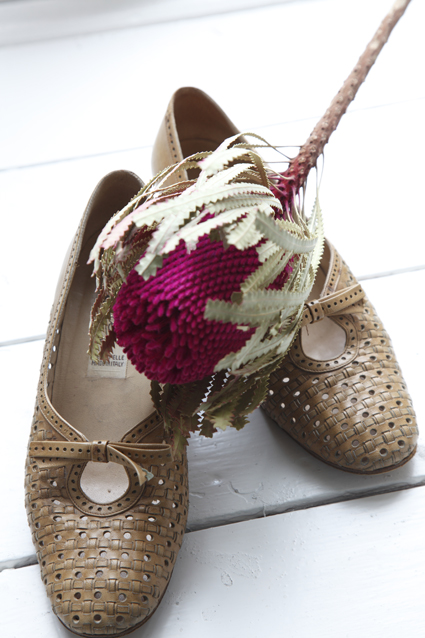 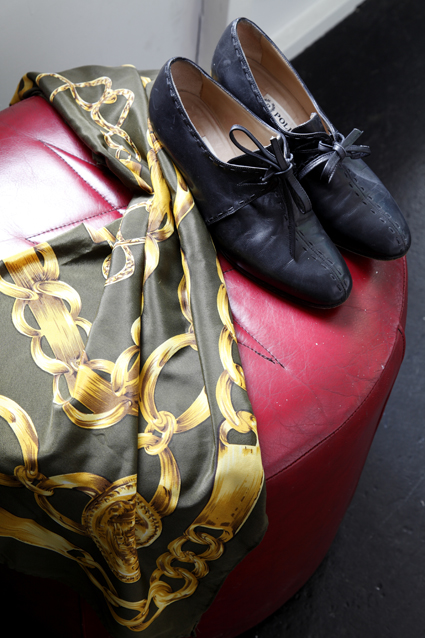 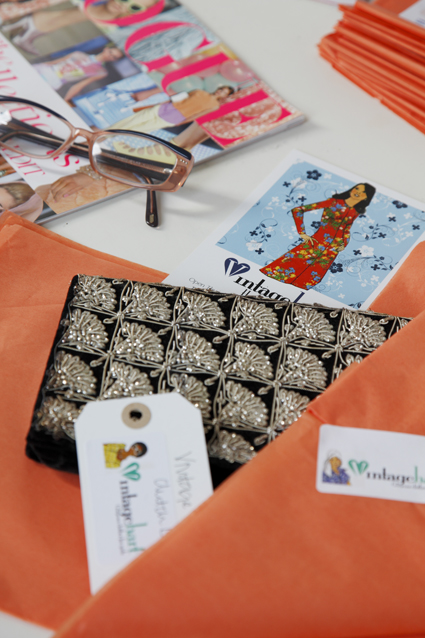 Both originally from outside London, the 2 met as mothers outside the school gates, and immediately recognised a shared passion for vintage style. Although both are creative, neither had any retail experience, but that hasn't prevented them from making a big success out of this little venture. Annette is proud to be part of the vintage wave that has helped turn Church Road from the poor relation of the Triangle, to a street with such a strong identity. There is also real pride in her voice when talking about the area in general, when I ask her, as I ask everyone, what it is about Crystal Palace that she loves. The answers, all to do with the people, the community spirit, the park and the views, are always the same, and we agree that it's difficult not to sound trite or cliched. But when you live here, you know it to be true! 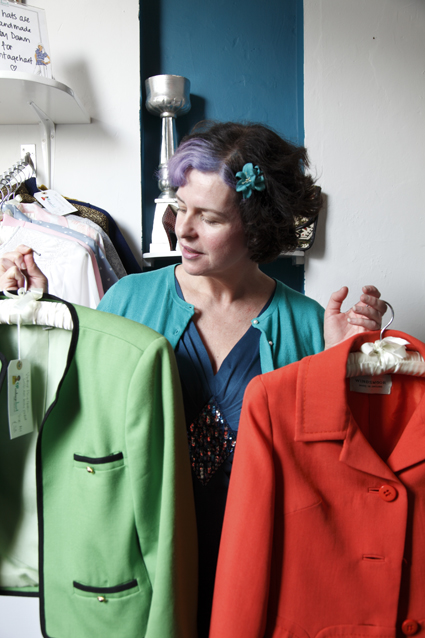 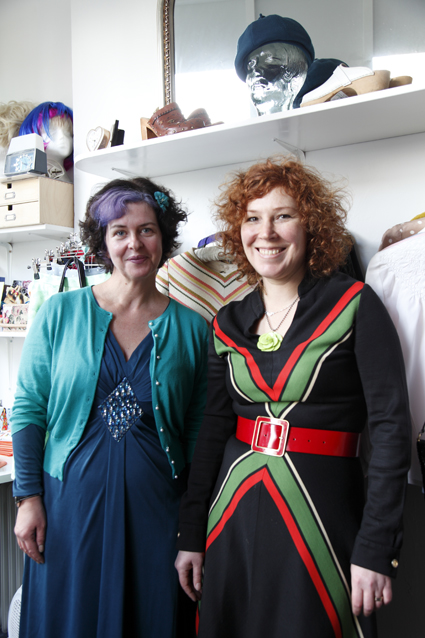 In addition to selling clothing and accessories from the 40s through to the 70s, Dawn, who studied fashion, designs and makes a range of beautifully detailed hats in brightly coloured felt. 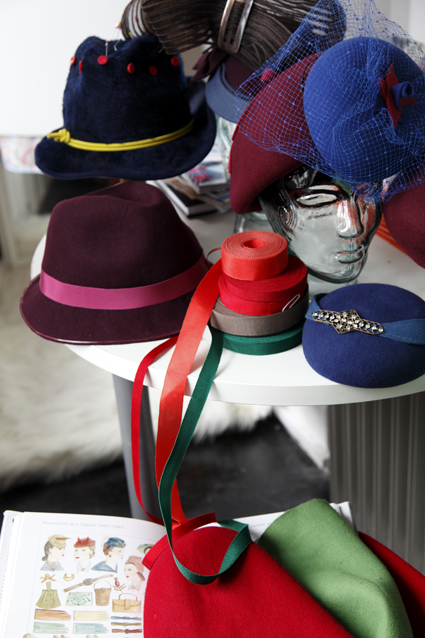 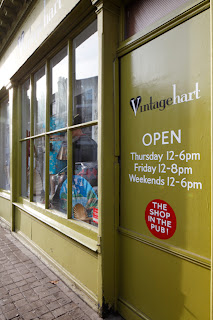 Posted by James Balston at 18:12 No comments: