The Bookseller Crow (on the hill)

Bookshops are in the news again, with the ongoing saga of Waterstone's. Just sold by HMV, they now have desires to be the nation's local bookshop. Well, here in Crystal Palace we have our own perfectly good local bookshop, namely, The Bookseller Crow.


Originally part of a small chain of bookshops called Wordsworth, the shop was reopened in its current guise by  partners Justine Crow and Jonathan Main, back in 1997, and has since become a pillar of the triangle. In that time, small bookshops have been under siege on all fronts. First there was the demise of the net book agreement, which had set prices and prevented book discounting. Supermarkets and the larger chains were suddenly free to undercut each other, leaving independent shops unable to compete. However, according to Jonathan, this has turned out to be a boon. No longer able to compete in the 'blockbusters' market, there is now the space to sell a wider and perhaps more interesting range of titles, including plenty by  local and less well known authors. 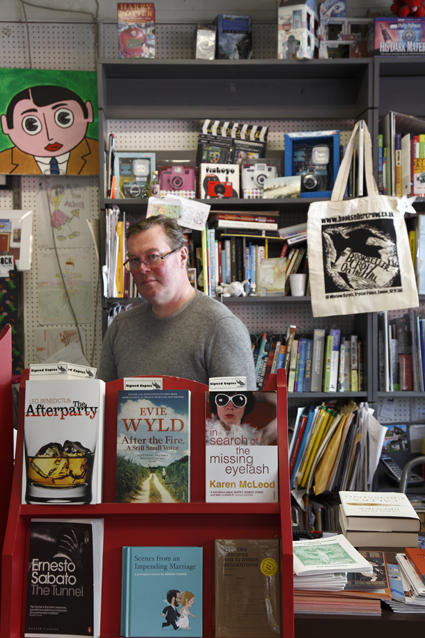 The rise of Amazon and more recently ebooks, have provided further challenges, and no doubt some bookshops have fallen by the wayside as a result. But again, The Bookseller Crow has found ways to adapt. By hunting out the more unusual and stocking particular specialisms, the shop encourages people to return and browse, building a dedicated following. For example, the graphic novel, is a particular niche that by his own admission, Jonathan knew little about until recently. It has an avid fanbase, and appears to be less prone to the onslaught of online shopping, presumably as its connoisseurs invariably want to thumb through a few pages before buying. Likewise, children's books are bucking the online trend, and younger readers are well catered for here. 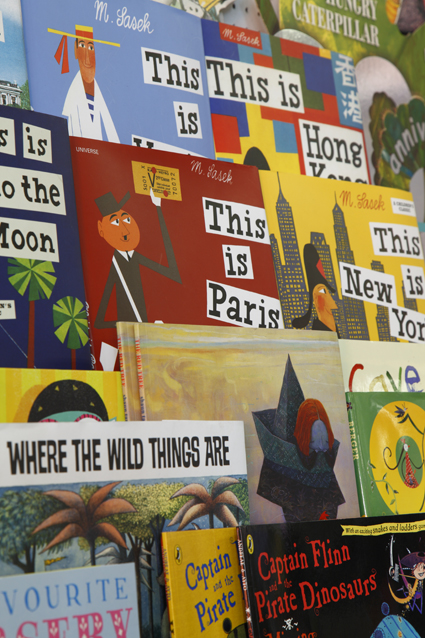 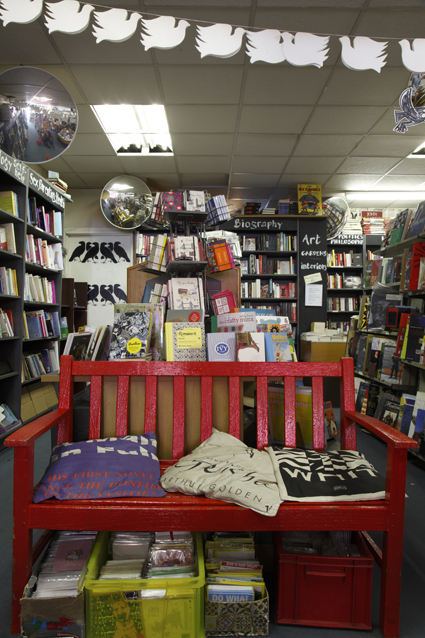 The result is a shop that feels as though you are likely to discover the unexpected, and its far from corporate style makes it feel like something of a community centre; one that even has its own notice board in the form of an entertaining blog, The Bedside Crow. Like all good community centres, the shop holds regular events, from a monthly book club, to performances, both musical and poetic. For the next happening, this coming thursday (26th May), they have lined up writer and broadcaster, Isabel Iosada. 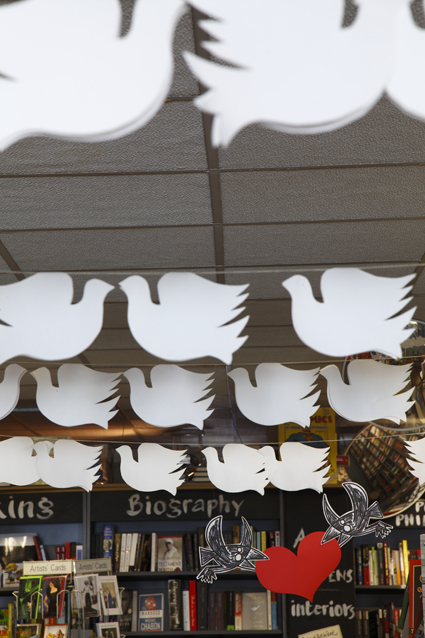 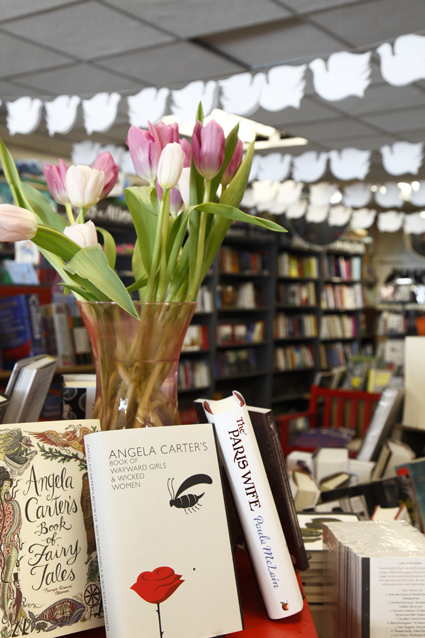 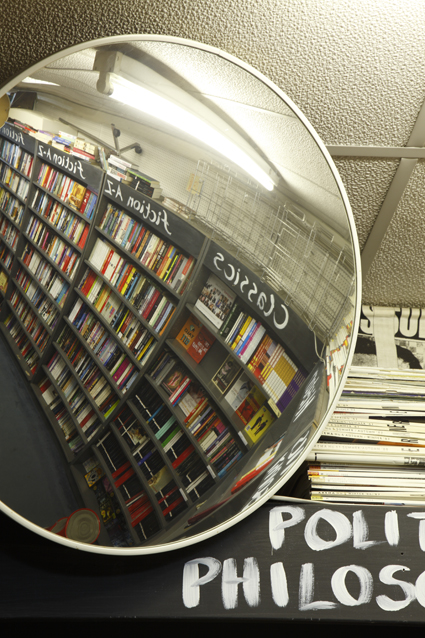 Finally, I would also recommend Jonathan's pithy tweets. If you are not already following him, he's @booksellercrow. 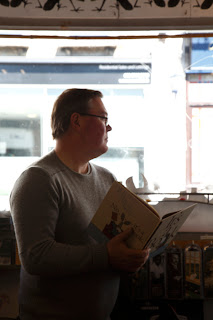 I'd lived in the area for several months before I actually ventured down any of the alleyways in the triangle. From the 3 surrounding streets, you could be forgiven for thinking that little of interest lies within. And yet it transpires that hidden away are hives of industry, havens of creativity. I was recently tipped off by Mandy at Glitter & Twisted about a metalworker called Jonathan Rowlandson, whose workshop is tucked away off Carberry Street. 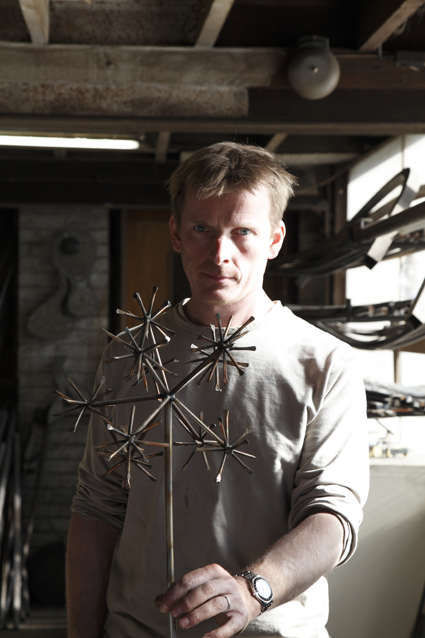 The industrial space is full of works in progress, from traditional railings to modern one-off sculptural pieces and furniture. Jonathan learnt his trade in the early 90s at Middlesex Polytechnic, as it then was. Although an arts oriented institution, its 3D and Product Design degree course had strong industrial foundations, teaching the fundamentals of forging, blacksmithing and silversmithing. The students even had to make their own tools, he remembers. 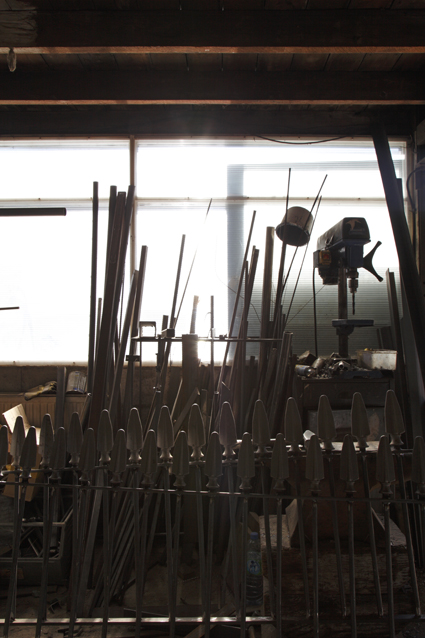 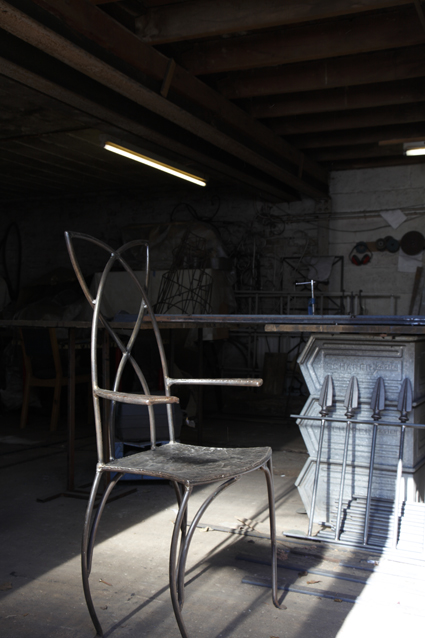 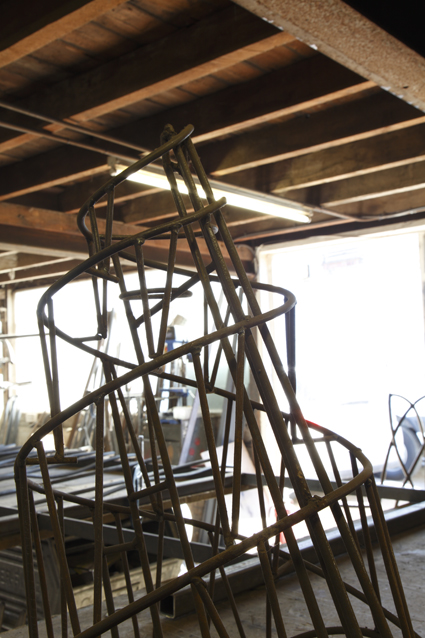 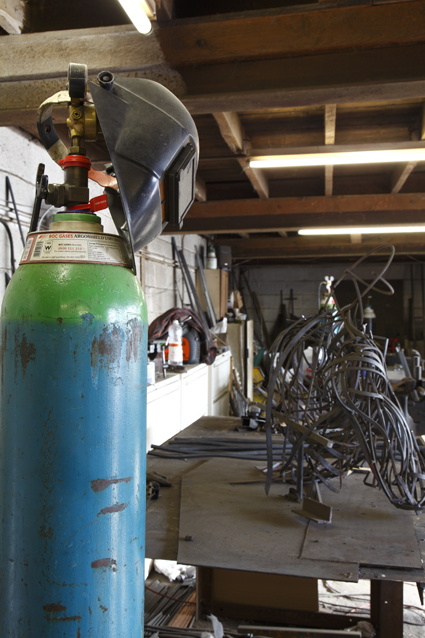 I discover that our paths almost crossed in 1994, when during my former career as an interior designer, I was designing stores for retail chain, Jigsaw, and he was commissioned to make a set of wrought iron orange trees for one of the company's flagship stores designed by Nigel Coates. It is interesting to note, that back then metalwork was enjoying a decorative flowering, with Baroque curls and organic forms. A decade later these styles were displaced by clean lines and modernist simplicity. More recently the tide has turned again, returning to the more organic forms that Jonathan favours. 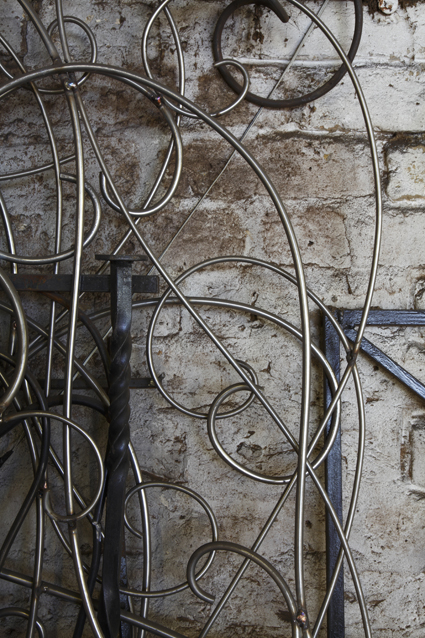 I asked him, what lead him to choose metal, over say, wood. 'Metal does what it's told' was the honest answer. The implication being that while wood has a life and form all its own, which needed to be worked with and respected, metals could be bended to your will. The variety of possible colours and finishes also appealed to Jonathan, as can be seen on his website.
Living and working locally, Jonathan is an active member of the local Chamber of Commerce. Much of his work comes via word of mouth, and he values his strong local links which have lead to various commissions. You have no doubt noticed his stunning set of gates beside the Alma pub, or his rustic garden fence which incorporates woven panels of hazel at the end of Carberry Street. He also works hard to encourage new interest in his industry. A series of commissions from schools, has involved the children in designing elements of the work. 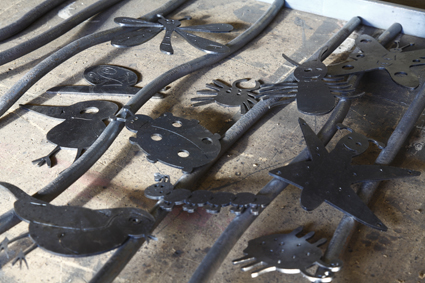 In addition he has plans to start courses for adults keen to unleash their inner blacksmith. To commission Jonathan, you can contact him on 020 8653 1027 or jonathan.rowlandson@virgin.net 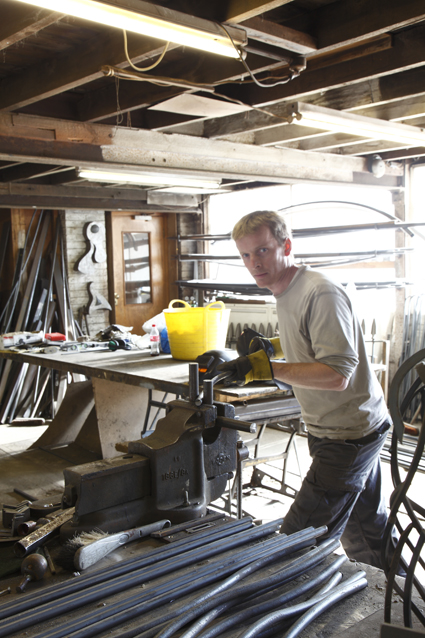 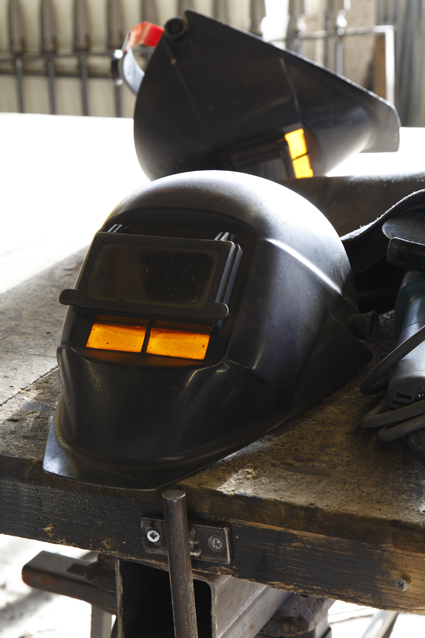 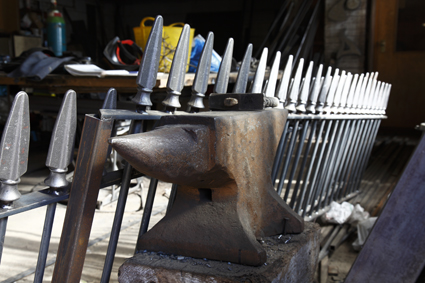 Posted by James Balston at 13:33 No comments: